Will Hydrogen Fuel Cells Play a Role in the VTOL Revolution? 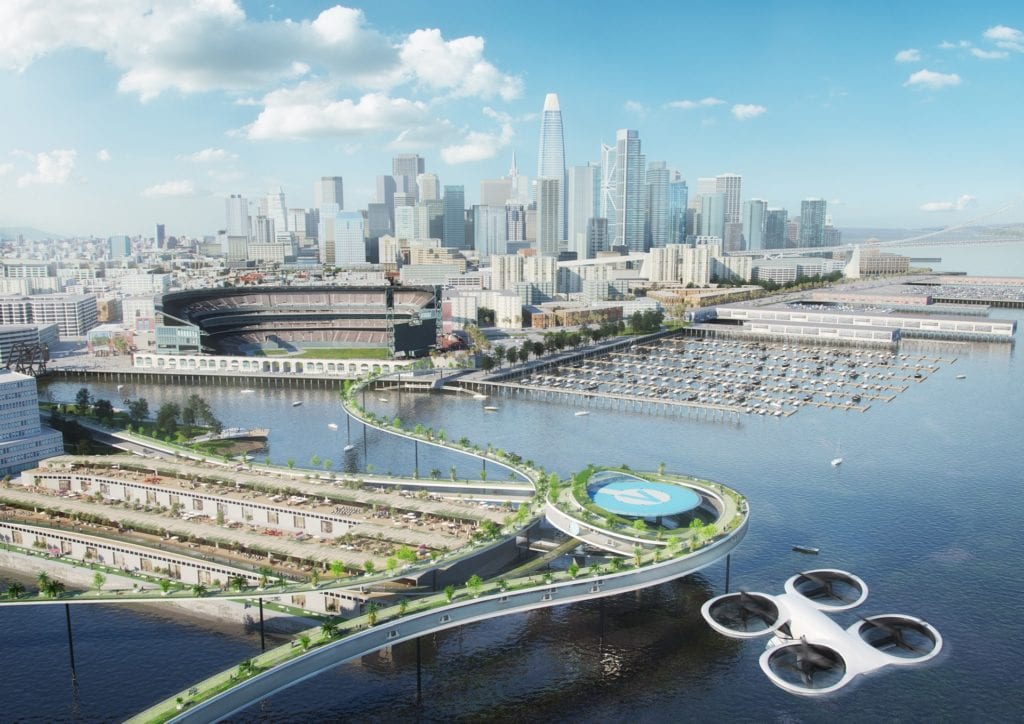 Hydrogen fuel cells provide some advantages over lithium-ion batteries, which have limited energy density. But are they right for vertical lift? (MVRDV)

Almost all players in the emerging urban air mobility industry have converged on the idea of using fully-electric aircraft, powered by lithium-ion batteries, to create affordable aerial transit options for relatively short distances.

But a few companies continue to develop and advocate for the use of hydrogen fuel cells in VTOL aircraft, maintaining they hold innate advantages over lithium-ion batteries – primarily in energy density and lifespan – and are the superior choice.

HyPoint, a venture-funded company in Menlo Park, Calif., has demonstrated an air-cooled hydrogen fuel cell powertrain that produces 1000 watts per kilogram of specific power with an energy density of 530 watt-hours per kg. These figures far exceed the density that lithium-ion batteries with a comparable power output will reach in the next decade, according to founder and CEO Alex Ivanenko, as well as that provided by liquid-cooled fuel cell systems used in automobiles such as Toyota's Mirai.

The company's next version of the product will reach 2,000 W/kg specific power and 960 Wh/kg energy density. Currently in the prototype phase, HyPoint expects the system will be ready for testing in the beginning of 2022 and commercialized in 2023, at a price point of between $100-500 per kilogram (if mass-produced). 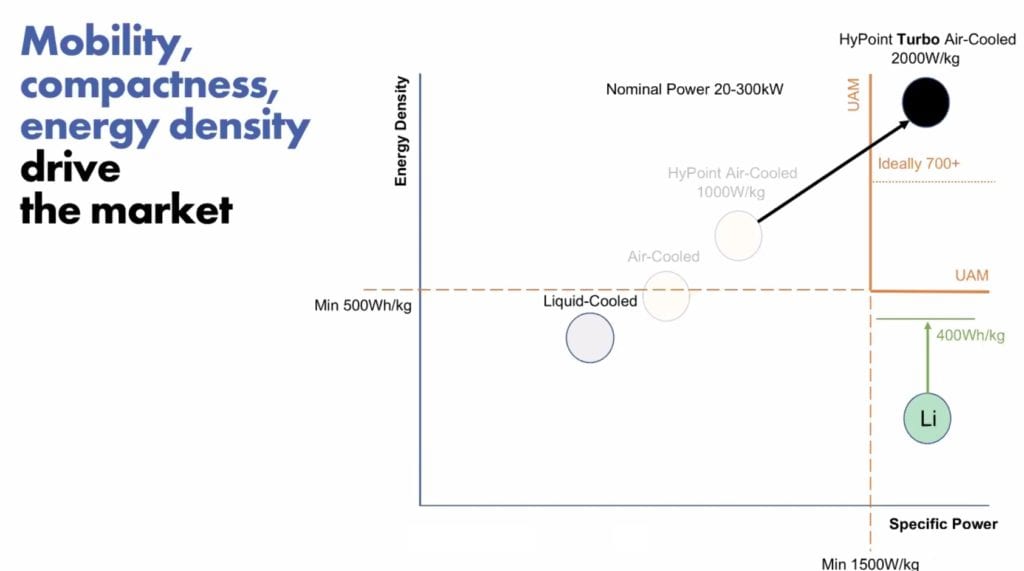 A chart shown by HyPoint comparing fuel cell systems to their concept of VTOL requirements. (HyPoint)

"Air transportation imposes high requirements for both [specific power and power density," said Sergey Shubenkov, chief of research and development at HyPoint, during a presentation on the company's proposed contribution to urban air mobility. "Neither lithium batteries nor existing fuel cell systems can meet both requirements. We believe that improvements in existing liquid-cooled fuel cells will not allow developers to overcome these barriers in a short time. A liquid-cooled powertrain has too much parasitic mass."

HyPoint made the decision to focus on the air transportation market in the first quarter of this year, according to Ivanenko, and has received letters of intent from companies in the market that "confirmed that we provide real value," he said.

There aren't many VTOL aircraft developers incorporating hydrogen as their power source. Perhaps the most well-known, Massachusetts-based Alaka'i Technology, unveiled its six-rotor ‘Skai' prototype targeting 118 mph cruise speed and a range of 400 miles for four passengers and one pilot. Online investigators believe photos of an unidentified VTOL aircraft near Mojave, Calif., are in fact a hydrogen-electric project by Toyota. 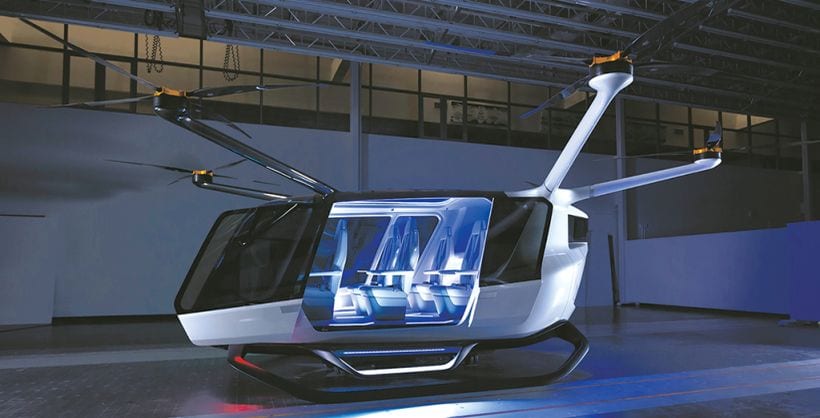 Uber, one of the most notable players in the urban air mobility space and author of the seminal Elevate white paper, has extensively studied hydrogen, hybrid-electric and other possibilities, arriving at a firm conclusion that battery-electric is the best option for UAM. None of Uber's eight publicly confirmed vehicle partners use hydrogen as a power source.

Moore added that fuel cells also have poor specific power and "are not able to provide the power output required by eVTOL aircraft."

Most fuel cell systems built for flying are combined with batteries, which are recharged during flight, to reach the power requirements of takeoff and landing, as Forrest Harrington, business development for Ballard Unmanned Systems, a provider of fuel cell products for unmanned systems, explained from the perspective of commercial drones during a webinar provided by the Association for Unmanned Vehicle Systems International (AUVSI).

"Hydrogen fuel cells by themselves have limitations just like batteries," Harrington said. "Batteries have limited flight time, and fuel cells today have a slightly lower power density, which in use translates to limited payloads that a vehicle can carry, particularly in vertical lift operations. When we look at fixed-wing vehicles, they have a far more efficient aerodynamics than multirotor vehicles and use less power, which makes them more ideal candidates for fuel cells."

If HyPoint's turbo air-cooled fuel cells are able to reach the specific power advertised by the company, they may overcome this drawback and have greater application in vertical lift.

Ivanenko also explained to Avionics that fuel cells' longer life and faster recharging time – measured in minutes, he said, compared to Uber's expectation of a battery-powered VTOL needing half an hour to recharge after two fifty-mile trips (including rapid-charging in between) – would result in higher utilization, which most UAM advocates have agreed is key to the industry's success.

But there's a much larger barrier to using hydrogen for UAM: infrastructure. Hydrogen just isn't readily available throughout the United States, with even more supply chain issues than eVTOLs face with batteries. Also, transporting hydrogen safely onto city rooftops is a tall order.

"Hydrogen fuel is not readily available and would require on-site storage at Skyports, which is challenging for retrofit structures with current fire code restrictions," Moore said. "Uber has analyzed battery, fuel cell, and hybrid-electric eVTOL aircraft, with the clear winner providing the best performance with the lowest weight and cost being the battery electric."

Capital markets appear to agree with Uber's conclusion, at least for the moment. Michael Dyment, managing partner of Nexa Capital Partners, told Avionics that the "vast majority" of investment in power systems is focused on electric or hybrid-electric – meaning fossil fuel-powered generation of electricity while in flight – and hydrogen fuel cells, though promising, remain an "around the corner" technology for the moment.

There may be future applications for hydrogen fuel cells in passenger and cargo vertical lift, particularly in longer-range transportation outside of cities. Fuel cells also aren't reliant on rare earth metals needed to manufacture lithium-ion batteries, and significantly outperform them in cold environments.

Batteries and fuel cells may both have economical applications in aerospace, similar to their evolving role in ground-based transportation. But for the moment, the coming generation of VTOL aircraft for urban air mobility will likely be fully-electric and powered by batteries.