Check out the Oct. 25 edition of What's Trending in Aerospace, where editors and contributors for Avionics International bring you some of the latest headlines happening across the global aerospace industry. 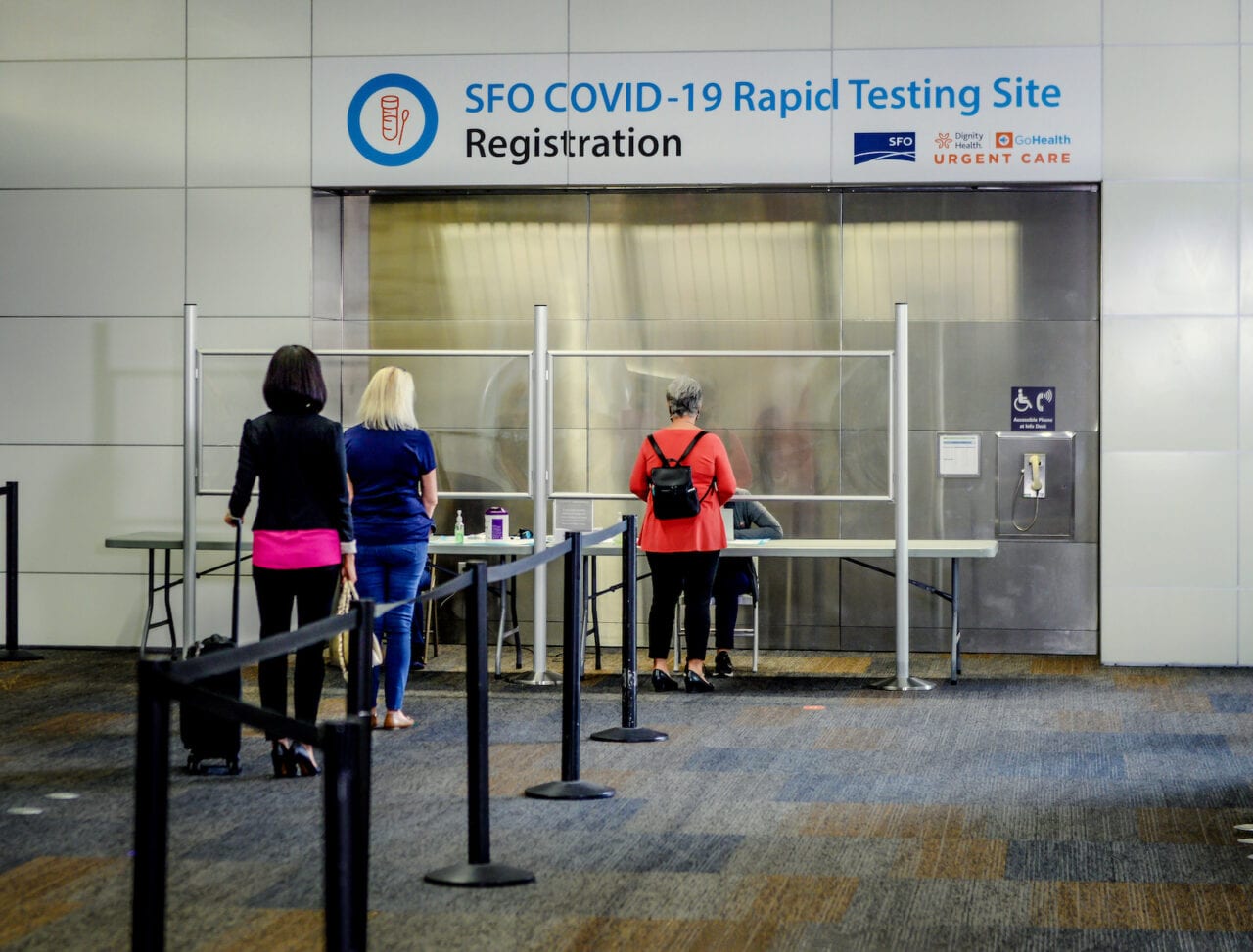 United Airlines started its COVID-19 pilot testing program for passengers traveling from San Francisco International Airport to Hawaii on Oct. 15, 2020. Passengers who return a negative result to the test will be able to bypass Hawaii's mandatory quarantine requirements.

Two tests will be made available to passengers traveling to Hawaii, including a "a rapid test option taken at the airport on the day of travel or a drive-through test conducted at the airport 48-72 hours before departure," United said in an Oct. 15 press release.

"Customers who produce a negative test result through either option will be exempt from quarantine requirements in Lihue, Maui and Honolulu. Customers traveling to Kona will be required to take a second complimentary test when they arrive to the island to avoid quarantining," according to United.

"There's no doubt that COVID-19 has changed the travel experience, and United is committed to innovating to help customers continue to travel where they want to go in a way that is safe," said Toby Enqvist, Chief Customer Officer at United. "In partnership with the San Francisco Airport, we look forward to helping re-open the Hawaiian economy, and look forward to making testing options more broadly available to our customers so we can continue to connect people and unite the world." 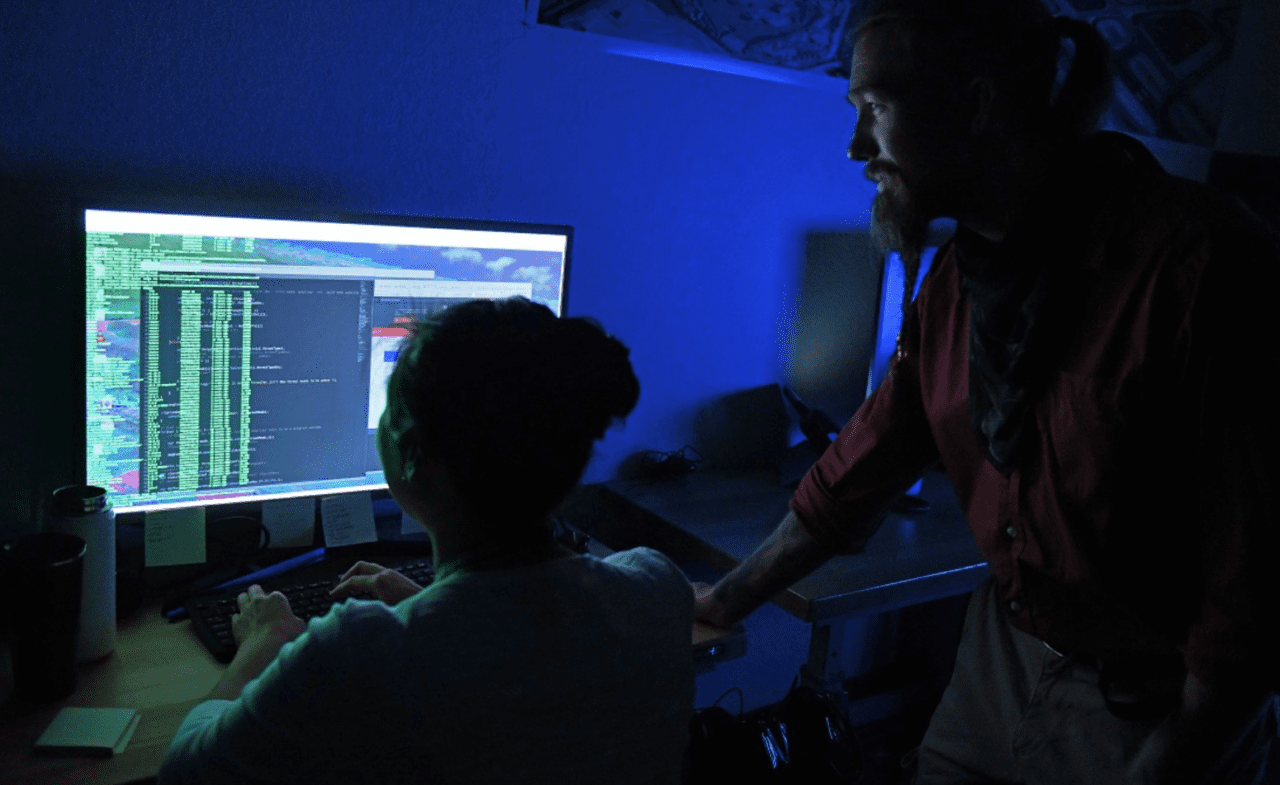 The U.S. Air Force updated software code on a Lockheed Martin U-2 reconnaissance plane in-flight on Oct. 16, according to Air Force acquisition chief Will Roper.

The Air Force's Air Combat Command at Langley AFB, Va., has been testing a Zero Trust Architecture (ZTA) that uses open-source container-orchestration systems, such as the Cloud Native Computing Foundation's (CNCF) Kubernetes, originally designed by Google, for improving cybersecurity through the automation of computer application deployment, scaling, and management.

Check out the full story as first published on Defense Daily, a sister publication to Avionics International. 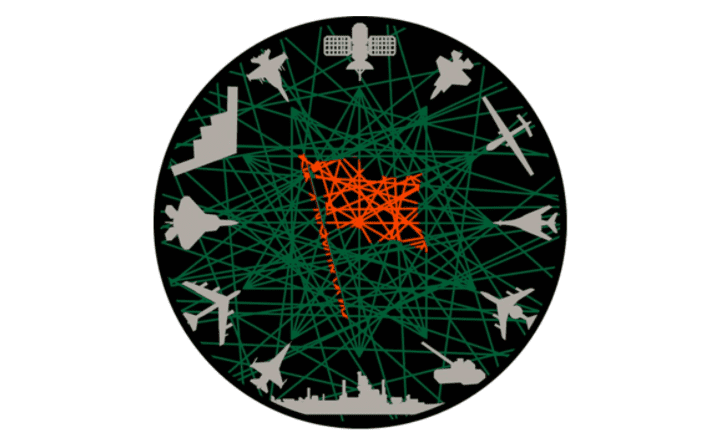 Orange Flag is an exercise born from a need to maximize resources across air, land, sea, space, and cyber domains to include joint and coalition forces. The exercise aims to bring test as close as possible to the warfighter through combat relevant testing early in the development cycle. (Air Force)

In September, a total of 40 aircraft and five land units joined other space and cyber capabilities for a multi-domain, large force test series exercise, Orange Flag. During this exercise, they accomplished a dramatic change in how test professionals engage with test data, made progress in connecting F-35 Lightning IIs directly to Army fires without human-in-the-loop intervention, and made improvements to the way complex kill webs are analyzed, according to an Oct. 19 press release.

Orange Flag, which took place at Edwards Air Force Base, aimed at using joint and coalition forces to maximize resources across air, land, sea, space, and cyber domains, according to the press release.

According to the press release, the Air Force focused the Orange Flag exercise on data-driven assessments of interoperability, lethality, and survivability."Orange Flag is an opportunity for participants to integrate technology into operationally representative scenarios at any and all technology readiness levels," Maj. Brandon "Siphon" Burfeind, Orange Flag director, said in a press statement. "Our goal is to disrupt traditional test timelines and expose technologies to difficult situations early and often."

These exercises happen three times per year and test aircraft in environments similar to their operations to achieve test objectives for COCOMs and participating units, according to the release. 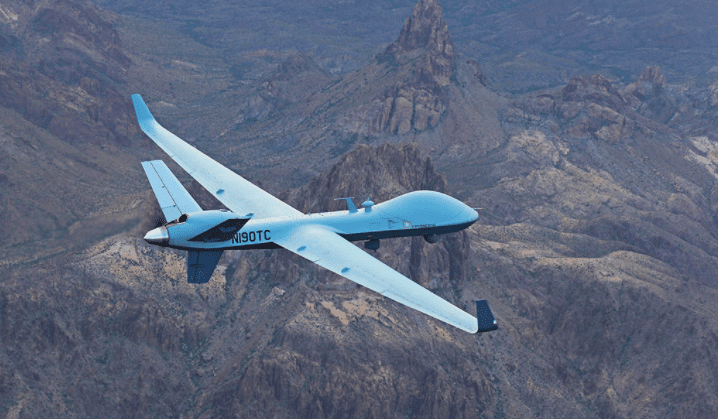 Hexagon's Geospatial division and ScioTeq have been selected by General Atomics Aeronautical Systems, Inc. (GA-ASI) to be technology suppliers in the development of the MQ-9B SkyGuardian Remotely Piloted Aircraft (RPA), according to an Oct. 20 press release. The industry solicitation event, Blue Magic Belgium (BMB), took place virtually during the week of Sept. 21.

Hexagon's Geospatial division, which provides software solutions and geospatial tools for visualizing location intelligence, and ScioTeq, which provides advanced visualization solutions, competed with 18 other companies in interviews and deep-dive engineering panel reviews during BMB, according to the release.

According to the release, ScioTeq will be studying the feasibility of a vision-based navigation capability for unmanned aircraft systems (UAS). Hexagon's Geospatial division will be working on enhancement to the auto-routing capability that is currently being developed.

"We were very impressed by the many talented companies that participated in Blue Magic Belgium, and particularly by the innovative concepts presented by the two companies selected," Tommy Dunehew, vice president of International Strategic Development for GA-ASI, said. "Belgium's decision to acquire the MQ-9B speaks to the strength of the NATO alliance, and the importance of interoperability."

The Seamless Air Alliance has published Release 2.0, which the organization defines as "provided by each network component, enabling suppliers to design and build OpenIFC products using the modular architecture and open interfaces from its first release."

"Seamless Release 2.0 completes the blueprint needed for the industry to scale the deployment of future-proof, OpenIFC systems," Jack Mandala, CEO of Seamless Air Alliance, said in an Oct. 20 press release. "This breakthrough will allow airlines to purchase best-of-breed components in a multi-vendor ecosystem, improving the efficiency of deploying, operating, and maintaining inflight systems – which is especially important as recent events have highlighted the critical role of connectivity." 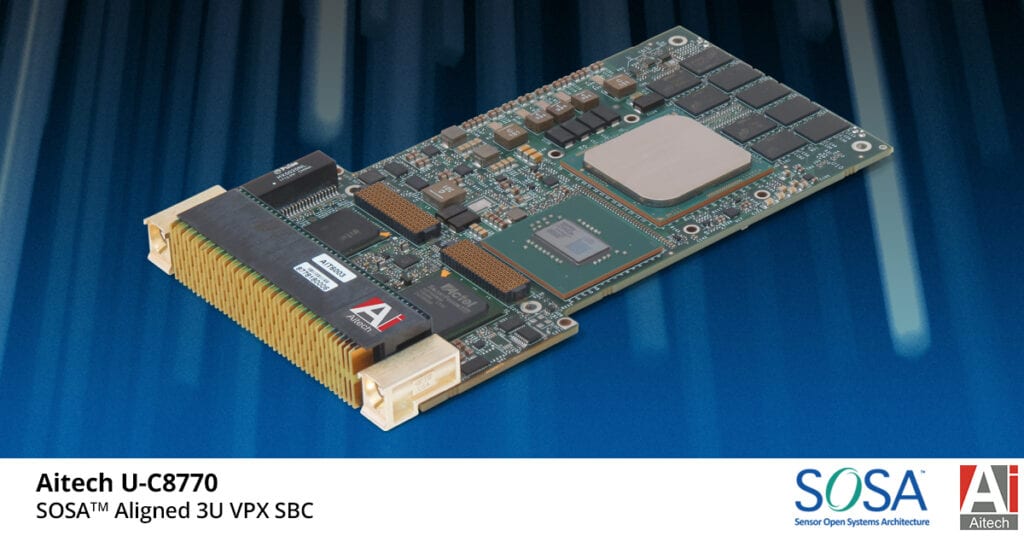 The SOSA aligned 3U I/O-intensive SBC Slot Profile will be able to transport large amounts of uncompressed video and sensor data quickly because it supports PCle4x and 40GE data plane options, according to the release.

"The emerging SOSA standard is designed to facilitate interoperability as well as simplify integration and innovation," Pratish M. Shah, General Manager US for Aitech, said in a press statement. "By ensuring our proven SBC technology aligns with the standard guidelines, we are able to quickly offer solutions that help our military and defense customers build and deploy their products faster and more efficiently."

Bosnia and Herzegovina Directorate of Civil Aviation, BHDCA, introduced Air Traffic Services Message Handling System (AMHS) to replace the Aeronautical Fixed Telecommunications Network (AFTN) and enhance airspace communication.
The AMHS system enables of all types of ground-to-ground aeronautical messages such as flight plans, meteorological messages and NOTAM messages to be sent and received in accordance with the standards and recommended practices of the International Civil Aviation Organization (ICAO).

Continuous and secure flow of aeronautical messages is crucial to safe air traffic management. The system for BHDCA consists of a location-independent, redundant operating system (OPS), contingency system (CONT) and a training and testing system (TRAINING/TEST) and has been successfully operational since May 2020.

The AMHS system is a process of communication system that represents a central point of access to international AMHS networks and data, linking user terminals of operational services and units of BHDCA into the world exchange of data and information. 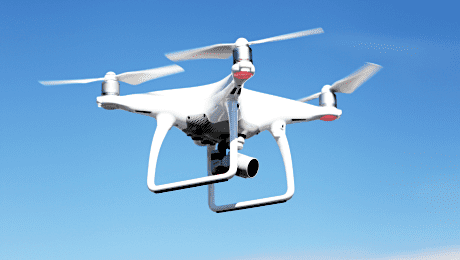 The European Union Aviation Safety Agency (EASA) has delivered a digitalized and secure system for the exchange of drones registration data among the national authorities of the Member States, putting the technical framework in place to allow registered users to fly their drones anywhere in the European Union with a single registration.

Commercial drone operators in Europe will use a new web-based system unveiled by the European Union Aviation Safety Agency (EASA) last week to register and manage the certification, oversight and other regulatory aspects of their operations.

Operators will be required to register their drones on a "broker system" managed by EASA that acts like a hub between individual European Union member states where their information and data can be transferred and analyzed securely by regulators. The solution, launched by EASA on Oct. 15, 2020 is "a broker system based on open web technologies and secured standards," the agency said in an Oct. 22 press release.

"Drones are a new entrant to busy urban environments in particular, and it is important that the aviation authorities know who is using them and for what purpose, to ensure that citizens who are going about their daily business feel, and indeed are, safe, even if drones are flying nearby," said EASA Executive Director Patrick Ky.

"We want to make this process as straightforward as possible for the users. The repository allows information registered with one authority to be shared with others, creating the basis for seamless drone usage across the European Union without the need to register in separate Member States," Ky said.

Drone users will be required to register as users of their drones with their national aviation authorities starting Dec. 31, 2020, when the EU's 2019/947 regulation takes effect. 2019/947 was originally slated to become effective on June 30, 2020, but its applicability was postponed as a result of the COVID-19 pandemic.

"Initially, it calls for the mandatory registration of drone operators and of "certified" drones, which are typically the larger drones used for business purposes," according to EASA. 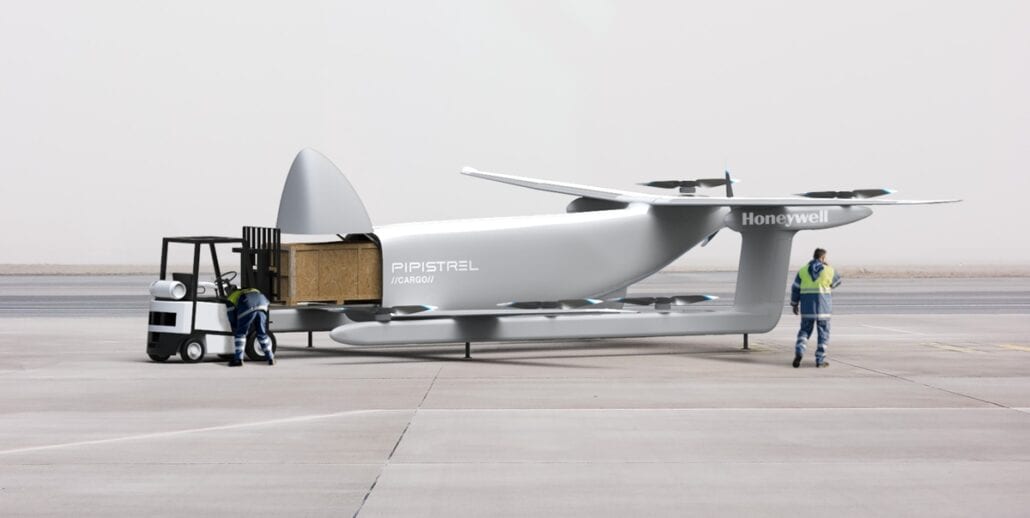 A computer-generated rendition of Pipistrel's Nuuva V300 being loaded with a forklift. (Pipistrel)

Honeywell, a technology company delivering industry-specific solutions, has been selected to provide the Nuuva V300 cargo unmanned aerial vehicle (UAV) with a compact fly-by-wire system that is about the size of a backpack to provide stability and performance capabilities to the UAV, according to a press release. The Nuuva V300 UAV is made by Pipistrel, a small aircraft designed and manufacturer.

The compact fly-by-wire system was designed specifically for small UAVs and urban air mobility (UAM). The Nuuva V300 can carry up to 300 kilograms for approximately 186 miles.

"One of the toughest challenges logistics companies face today is meeting the demand for same-day delivery," Stéphane Fymat, vice president and general manager of UAS/UAM at Honeywell Aerospace, said in a press statement. "Vehicles like Pipistrel's Nuuva V300 are going to be a real breakthrough in the race to solve this problem. We listened to our customers and built a product that meets the unique needs of this segment, and we're extremely proud that our Compact Fly-By-Wire system will be guiding these vehicles as they take to the skies."

Honeywell makes a full line of avionics equipment including flight controls, navigation, and radar that are designed for piloted vertical take-off and landing (VTOL) UAM, according to the release.

"After years of excellent cooperation in the UAM sector, we chose to work with Honeywell in the development of the Nuuva V300 as well," Ivo Boscarol, founder and CEO of Pipistrel Group, said in a press statement. "We see this cargo aircraft paving the way for the passenger-carrying Pipistrel 801, our proposed air taxi for Uber Elevate, as both aircraft share similar architectures. Honeywell's expertise and the proven capabilities of its Compact Fly-By-Wire system will provide airliner levels of safety for our novel air vehicles."