The Continuing Momentum of M2M/IoT via Satellite

The question NSR gets asked time and time again is "Why does strong growth continue in satellite Machine-to-Machine (M2M) when I can just use terrestrial networks, which are expanding all the time in both geographic reach and data throughput capabilities?" After all, a typical scenario is to pay $50 per month for 5 GB on a personal mobile phone data plan; and with M2M data use often in the few megabytes range monthly, shouldn't M2M services be cheap as chips?

For customers of M2M services, the value derived from knowing where everything is, anywhere at anytime, is simply enormous. As such, terrestrial operators can charge orders of magnitude more expensive rates for services that include specific applications – whether they be turn-key applications ready to roll out to thousands of units, or highly customized software written for a small number of high value devices. As competition intensifies in the terrestrial sector, this is expected to lead, slowly, from value-based pricing to cost-based pricing for GSM/3G/LTE services.

For NSR, a more key question is "What effect will this terrestrial price competition have on the satellite-based M2M/Internet of Things (IoT) segment?" With the exception of the low-end, not a great deal. Why? For the minority of M2M connections which are satellite-based, there are a great deal of strengths satellite has which simply cannot be (or would be prohibitively extensive to be) replicated on the terrestrial side.

These strengths are many, and in most cases they are strengths that are most relevant, and most valuable, to high Service-Level Agreement (SLA) type applications in remote regions, such as offshore oil and gas, transportation, and cargo shipping. Among other things, satellite connectivity is oftentimes more reliable, especially in remote and underserved regions. Further, due to more efficient and consistent connectivity via satellite, as compared to terrestrial, the battery life of terminals oftentimes sees significant improvement. Beyond that, satellite-based M2M can offer truly global coverage, with applications such as trans-oceanic shipping being addressable only via satellite. Finally, especially in mission-critical military and transportation sectors, the use of a single platform, as compared to a patchwork of terrestrial networks, provides a strong value proposition for M2M via satellite.

Looking at data as presented in NSR's "M2M and IoT via Satellite, 5th Edition" report, it is expected that the above factors, when combined with the expected explosive growth of the IoT in general, will lead to revenues for satellite-based M2M/IoT applications to increase from $1.1 billion in 2013 to nearly $2.5 billion by 2023, with in-service units seeing growth from under 2.5 million to nearly 6 million during the same timeframe. Of this, the overwhelming majority of revenues and in-service units (approximately 90 percent) will remain in L-band, with new systems coming online capable of handling more connections, driven by big data and deep analytics (such as Iridium NEXT). The net effect of a higher number of low-bandwidth connections will push up bandwidth demands, especially in the critical transportation sector. Furthermore, with the consistent trend moving forward being relatively low data throughput per unit, NSR expects L-band to remain the bread and butter for satellite-based M2M/IoT for years to come.

But what about non-L-band platforms? Of the $2.5 billion in M2M/IoT revenues by 2023, roughly $2.2 billion will come from L-band; this again being the vast majority of the M2M/IoT market. However, the remainder, totalling more than $250 million, is certainly no small change. Ku-band will play the leading role among other frequency bands, with more than $200 million in revenues by 2023, up from just more than $100 million in 2013. This will largely come from applications with higher data requirements, such as those in the oil and gas sector.

In terms of key sub-verticals, NSR's "M2M and IoT via Satellite, 5th Edition" study breaks the M2M/IoT market into 10 sub-verticals, including transportation, green energy and civil government. Of these, the two largest by a wide margin are, and will continue to be, transportation and cargo. Throughout the duration of the forecast, these two sub-verticals will account for between 65 and 70 percent of the total market for in-service units, and just under half of total revenues for much of the forecast. 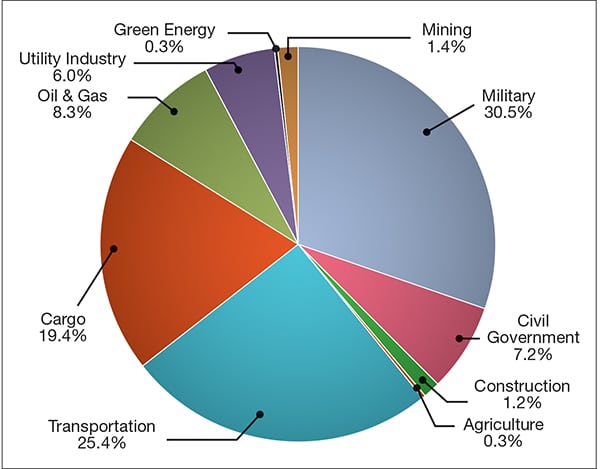 The M2M/IoT Network of Tomorrow

NSR has noted that in the medium-to-long-term, M2M/IoT via satellite will be a niche market, and one that is often intertwined with terrestrial networks; particularly in developed regions such as North America and Western Europe where terrestrial connections are considered both secure and stable. There is a trend for mobile assets to integrate satellite and cellular units, which will in turn help end-users reduce overall tracking costs and increase operational efficiency. As such, it is not at all difficult to visualize the scenario becoming increasingly common where for instance, a shipping company uses terrestrial for the majority of its connectivity needs, but also requires some amount of satellite capacity to complete their network.

Next-generation programs such as Iridium NEXT on the L-band camp, as well Ku-band and HTS, which can support larger data requirements and create new application suites, will likewise improve the satellite ecosystem and value proposition. Higher capacity programs not only improve the data offering on the technical side but also improve price offerings on the service front.

Together, terrestrial integration, an improvement of space-based systems and lowering costs should all lead continued growth as well as higher penetration in the overall (not just satellite-based) M2M/IoT industry.

Although terrestrially based networks dominate, M2M and IoT via satellite is poised for strong growth over the next decade, especially with higher numbers of sensors being implemented and monitored than ever before – each requiring their own M2M connection. This in turn is expected to drive up aggregate bandwidth requirements across the board, and thus provide ever-increasing revenues for the M2M and IoT via satellite sector. VS

Alan Crisp is an analyst at NSR based in Hong Kong. His coverage areas include research in the satellite M2M market and the Direct-to-Home (DTH) TV markets.