Nuclear Reactor with 3D-Printed Core Slated for Operation in 2023

A first-of-its-kind nuclear reactor that will use a 3D-printed core, advanced materials, and integrated sensors and controls is on track for completion by 2023.

Despite the COVID-19 pandemic, work is ramping up to demonstrate the Transformational Challenge Reactor (TCR), an innovative micro-reactor program spearheaded by Oak Ridge National Laboratory (ORNL) and project partners, to include Idaho National Laboratory, Argonne National Laboratory, and industry participants. On May 11, ORNL announced the project has completed several "foundational" experiments, including selection of a core design. During a recent three-month "sprint," it also demonstrated the "agility of the additive manufacturing technology" to quickly produce a prototype reactor core.

The development is notable for the project that got its start only 15 months ago, when it received $30 million from the Department of Energy's (DOE's) Office of Nuclear Energy. "We have been aggressively developing the capability to make this program a reality over the last several months, and our effort has proven that this technology is ready to demonstrate a 3D-printed nuclear reactor core," said Kurt Terrani, the TCR technical director.

Though it will be the fourteenth reactor built at ORNL since 1943–the national lab was established when the first continuously operating nuclear reactor went critical at the Manhattan Project's X-10 site at Oak Ridge, Tennessee–the program is innovative in both scope and schedule. As Terrani told POWER on May 9, the TCR program bucks the piecemeal approach that has characterized nuclear technology development for decades. It will instead take a holistic approach, integrating a wide array of more recent scientific advances.

Its goal is straightforward: to accelerate design, manufacturing, qualification, and deployment of advanced nuclear energy systems. In its essence, the project's mission is to "achieve a paradigm shift in new nuclear costs using a rapid advanced manufacturing approach," he said.

"If you take a look at the nuclear industry, they are using a certain class of material, they are using manufacturing methods, they're using qualification methods. All of these are pre-1970s–materials, technologies," Terrani explained. "And so there's plenty of room for innovating in this area, and that's what we want to do with TCR. Essentially, we want to harness scientific advances–really fundamental scientific advances, in manufacturing, material sciences, and computational sciences, and bring them into a demonstration."

If the project comes to fruition as scheduled by 2023, it could be the first advanced reactor to operate in the U.S. in more than 40 years. However, the reactor is slated play a much bigger role for the nuclear industry.

The demonstration of these technologies, processes, and approach will be pivotal to "entice the regulator and the industrial sector to adopt these technologies," explained Terrani. "We want to do these big lifts and take these concepts from a [technology readiness level (TRL)] 2 or 3 in the concept basis to a 6 or 7. And really, that's where they would be really ripe for industrial adoption."

ORNL is adhering to an aggressive schedule for the TCR program with urgency, in part because reactor development and deployment in the U.S. has nearly ground to a halt over the past few decades, owing to high costs and decades-long construction timeframes.

Only one new nuclear plant is currently construction in the U.S.–the two-unit Vogtle expansion in Georgia, a project beset by numerous delays and cost overruns since the original engineering, procurement, and construction contract was signed in April 2008. The regulatory-approved in-service dates for that project are November 2021 and November 2022, respectively, and some estimates have pegged the cost to complete the project at $27 billion or more. (In mid-April, Georgia Power said that it would slash the workforce at the massive construction project by about 20% to address the impact of the COVID-19 pandemic.)

Meanwhile, as Terrani noted on Friday, all current nuclear reactor licenses are set to expire by 2055, and more premature retirements resulting from cutthroat market competition could further diminish the existing fleet. And while the advanced reactors appear promising, developers face formidable hurdles that the government and industry are racing to address–such as needs for demonstration, high assay, low-enriched uranium (HALEU) fuel, and first-of-their-kind non-light water reactor (LWR) licensing.

While ORNL and its partners have just moved out of the conceptual stage and are now working to finalize a preliminary design, to meet the TCR's ambitious 2023 completion date, they are implementing an "agile" design process. "It has been applied in software circles since the 1980s–we didn't invent it," Terrani noted.

"Basically, it's not ‘Hey, we're going to take six months to do this,' it's we're going to take a week-and-a half, two weeks to do this." The process will ensure the project moves fluidly from design to simulation to manufacturing to testing, all while learning in between, he said. It starts with building the smallest components first, understanding how they fit together, and then moving into bigger and bigger procurements and activities, including those that require regulatory milestones.

Key to that process, however, is keeping the design "simple." Housed inside a vented confinement within an ORNL building, TCR will comprise a single pressurized helium gas-cooled reactor (GCR) of about 3-MWth, with a loop that includes a circulator, vessel, and a heat exchanger. The layout is designed to bolster the program's directive "to show that we can build an operating core fast." Terrani added: "We don't want to get into solving long-term corrosion issues, or other separate materials science problems. We are focused on manufacturing the core." 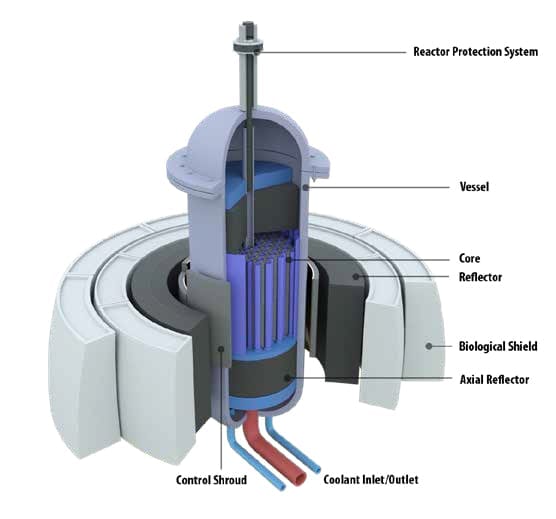 But though the core itself is less than half a meter cubed, "it takes a lot of fancy science and engineering to make a core that small go critical," he said. That's why among one of its ambitious undertakings, TCR will attempt to demonstrate that the core can be 3D-printed. "By using 3D printing, we can use technology and materials that the nuclear community has been unable to capitalize on in the last several decades," Terrani said. "This includes sensors for near autonomous control and a library of data and a new and accelerated approach to qualification that will benefit the entire nuclear community."

Taking the Conventional to Another Level

While the core will comprise a "conventionally manufactured" and qualified vessel made from grade 304H stainless steel, 3D printing will be applied to the silicon carbide matrix that will contain uranium nitride tristructural-isotropic (TRISO) fuel particles, a type of HALEU fuel.

ORNL, a globally recognized developer of micro-encapsulated fuel technologies, has already done the brunt of development work, including manufacturing and early irradiation of the novel fuel particles. The additively manufactured silicon carbide and fuel particles offer significantly higher uranium density over historic manifestations of coated fuel particles and "may be more optimal for a range of advanced reactor applications," especially those with small cores, said Terrani.

"These TRISO particles are embedded in a silicon carbide matrix, which is an incredibly refractory high-temperature material. It can go to very high temperatures, it's incredibly oxidation-resistant in steam environments, it's incredibly inert, it's repository ready." The fuel blocks are arranged within 316L stainless steel structures–which will also use advanced manufacturing–and are interspersed with yttrium hydride moderator elements. "The hydride moderator minimizes the amount of [HALEU] required to reach criticality," he said.

Terrani noted the additive manufacturing technologies in use at the project have been customized to meet its tight schedule. Some components will be printed with commercially available laser powder bed fusion technology, but for its ceramic components, it uses an ORNL–invented process that combines commercial binder jetting technology with chemical vapor infiltration. "That gives us this really high purity, fully crystalline nuclear-grade carbide material that we want," he said. 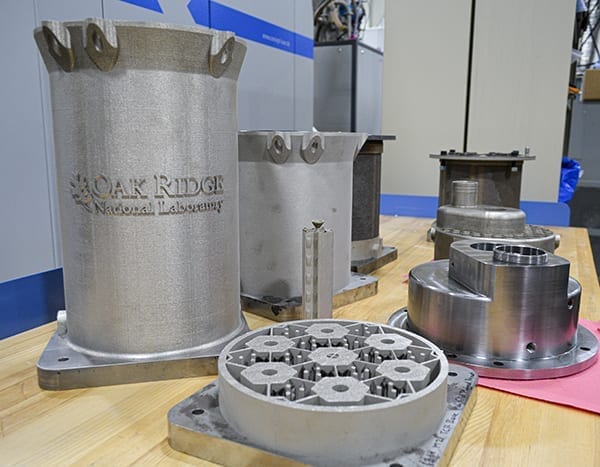 ORNL scientists have demonstrated the ability to rapidly produce a prototype reactor core that is partially 3D-printed. Researchers will now focus on refining the selected design and the processes that will ensure an optimal and reliable energy system. Source: ORNL

Among many other benefits of 3D-printed components that Terrani highlighted are that it will allow ORNL and partners to control manufacturing–making corrections "on the fly"–as well as optimize their performance. "We're using additive manufacturing to make these complex, wacky shapes, not for aesthetics, but to increase performance," he explained. "Right now, I have a cooling channel. Instead of it being a boring, perfect cylinder or a rod, now, it's got a curvature to it, it's got surface features that drastically increases your heat transfer properties. So now, with the same volume of flowing coolant, you can harness a lot more power."

As crucially, 3D printing allows the TCR to embed sensors into key structures, making it capable of obtaining real-time information about its health for enhanced diagnostic and prognostic assessments, and promising to shave operations and maintenance costs. Compared to legacy systems, the embedded sensors–which include optical fiber and ultrasonic sensors–open up a whole new realm of vision into the reactor and even its core. It also potentially integrates more autonomous operations, which may offer another pathway to boost the economics of advanced reactors, for example by requiring fewer people to run a plant, Terrani said.

Benefits of Starting from Scratch

Additive manufacturing of the important components also serves the pivotal function of providing data "for every small volume of the material during manufacturing–not afterwards–to certify their performance," Terrani added. "Today we have supercomputers and clouds to handle the amount of really big data. We're not inventing those tools, we're simply exploiting them."

Yet another important benefit of collecting the tremendous data for each part is for regulatory purposes. "The Nuclear Regulatory Commission is very interested in the data science, [because it allows staffers] to live and see through the manufacturing process," and contributes to its mission to ensure elemental safety of nuclear reactors. "That's another hypothesis we hope to test with the demonstration," he said. "We want to give that level of confidence to the regulated industry to adopt these new technologies."

Though it is inspired by processes used to build early reactors, which took as little as nine months to erect, throughout the entire TCR process, safety will be paramount, Terrani said. "In this day and age, we do not design reactors that are not passively safe. I'm not relying on some safety device, I'm relying on the laws of physics and gravity to make sure there's no release, no damage to the core," he said. Notably, however, the TCR also has a unique instrumentation and control (I&C) system that interfaces with the central shutdown rod and a reactor control system, each system, which is independently capable of shutting down the reactor.

Compared to their reactor-developing predecessors in the 1940s, 1950s, and 1960s, meanwhile, ORNL and its partners have the mammoth task of ensuring the technologies they are demonstrating can be adopted. One of its key objectives is to engage with industry, standards development organizations, and regulatory bodies to enable a "broad adoption" to the TCR approach. ORNL and its partners, are also hoping for the more formidable outcome of reestablishing the credibility of the national complex to undertake and deploy advanced nuclear energy systems at a low cost and a reduce timeline.

"You really need to do beginning–to-end demonstrations to add value," Terrani said. "We will do the things that are difficult–we have all these nuclear facilities, we have all these people who wear different hats, have different knowledge, and we can bring them together to do a demonstration like this to show technology maturity." So far, though TRLs may hover at 6 or 7, the tremendous interest from other government organizations and industry has been heartening. "It's music to our ears," he said.