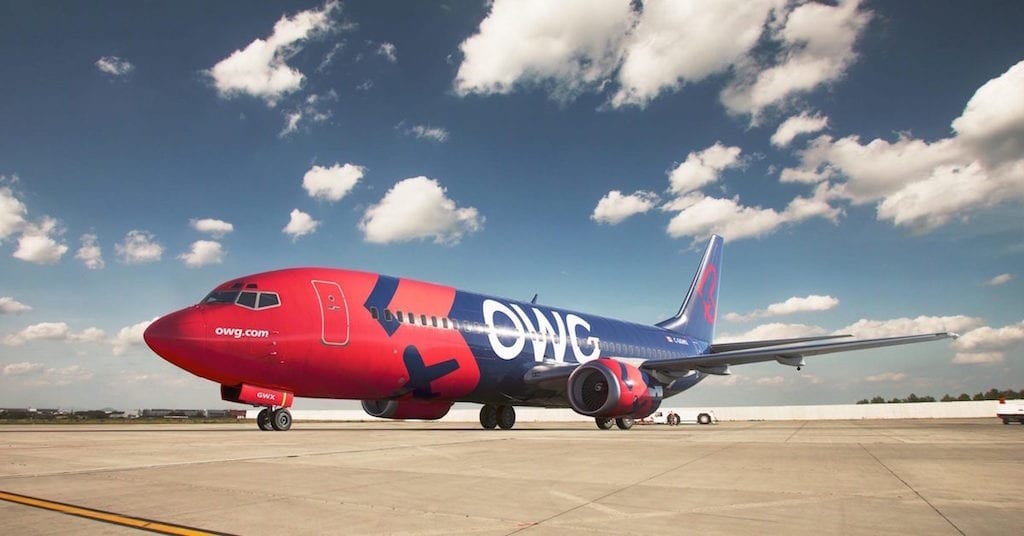 Along with launching the new airline, scheduled to start passenger carrying service in September, details on the fleet's avionics equipment were outlined on their fleet website and through a press release published by Skytrac, a Canadian supplier of aircraft satellite communications and internet connectivity enablement.

"The interior of each plane was refurbished with new, lighter and sturdier seats. All of this work represents an investment of several millions of dollars," according to a July 7 press release published by Nolinor announcing the launch of OWG.

Each Boeing 737-400 operated by OWG features 158 economy seats with a 2,500 nautical mile range and top speed of 550 mph. Nolinor also equipped each aircraft with new GPS and Localizer Performance with Vertical guidance (LPV) technology. The use of LPV enables one of several minimum approach types that can be flown using the Wide Area Augmentation System (WAAS), European Geostationary Navigation Overlay Service (EGNOS) and other regional aircraft navigation augmentation systems.

OWG notes that the addition of LPV represents "an investment of over $400,000 CA per aircraft."

Another system that Nolinor highlighted throughout its announcements about the new fleet is the real-time satellite communications system for the aircraft supplied by Skytrac. ISAT-200A, Skytrac's GPS and Iridium satellite transceiver is capable of facilitating real-time fleet awareness, group communications, and systems performance trending and analysis, according to an Iridium product description of the technology.

"Adding the Skytrac system to our new fleet of Boeing 737-400 was a no-brainer for the OWG division. Following our aircraft in real time is a must – the rest of the features are bonus points," said OWG President Marco Prud'homme.

Nolinor further notes that each of its aircraft's flight management systems include True North's Super Attitude Heading and Reference System (AHRS) to deal with the operating environment that the company says is more susceptible to "the greater risk of indication errors related to magnetic north." Some flights operated by Nolinor also still feature mechanical engineers onboard in the event of a mechanical breakdown occurring in one of the other remote regions that it provides charter and cargo services to.

Beyond the fleet technology, Nolinor is looking to use OWG to "win the hearts of Quebecers with a new airlines whose mission is to get travelers excited again," according to Prud'homme.

"The flight portion of your trip should be an integral part of your vacation. Traditional airlines have chosen to cut the quality of their services year after year with no regard for the passenger experience," he said.

OWG's launch comes as other Canadian airlines adjust to the COVID-19 global pandemic, with some going through fleet retirements and increasing operating schedules to regions where travel restrictions are being lifted.

Air Canada for example, is accelerating the retirement of 79 aging Boeing 767s, Airbus A319s and Embraer E190s while also suspending service on 30 domestic regional routes and closing eight stations at regional airports in Canada. The carrier also reported a net loss of $1.05 billion in the first quarter of 2020 and reduced its staff by more than 50 percent through layoffs, severances, early retirements and special leaves.

Nolinor described the launch of the new airline as occurring "against all odds," with OWG being its first expansion beyond Canadian regional flying and into the tourist flight market.