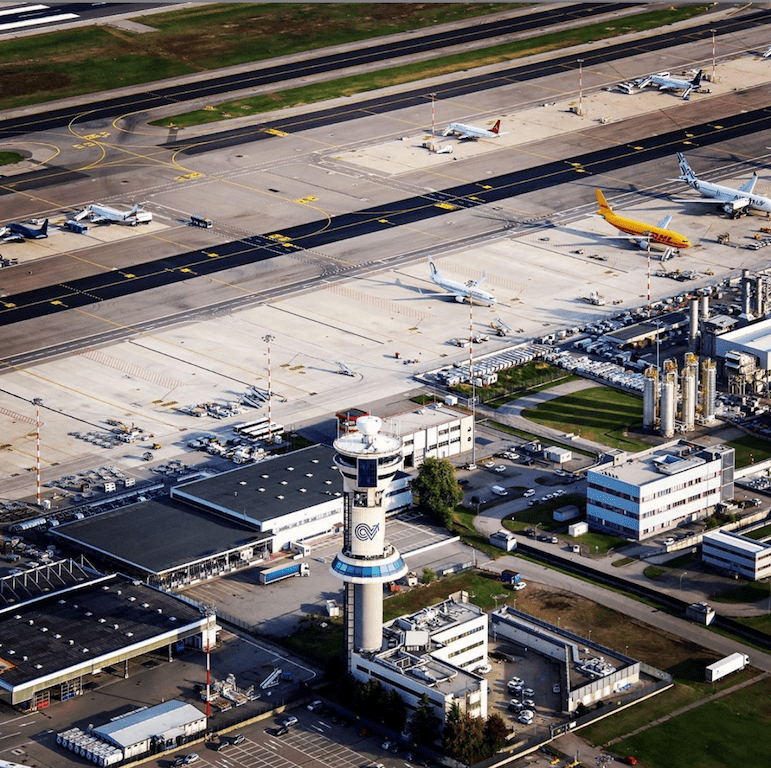 All of the ground to ground network infrastructure supporting air traffic services throughout Italy, including Milan's Malpensa Airport pictured here, will be transitioned to a new internet protocol-based environment under a contract between ENAV, Nokia and Sirti. Photo: ENAV

ENAV manages an estimated 2 million flights per year within Italian airspace, and recently reported an increase of 4.6 percent in domestic traffic through the first nine months of 2019.

"Nokia, as part of this project, will upgrade the entire Ground-Ground networking solution for ENAV to support key applications related to communications, navigation and surveillance," Harris said. "The new ENET will consist of state of the art Service Routers from the Nokia portfolio: the 7750 SR-a8, 7705 SAR-8 and SAR-18, VSR-RR (Virtual Service Router Route Reflectors), as well as the Network Services Platform. This new Internet Protocol/Multiprotocol label switching infrastructure will be able to support the latest mission-critical Internet Protocol applications while providing support to the legacy ones for as long as ENAV will require."

Sirti is providing design, implementation and maintenance support for Nokia as part of the upgrade. E-NET2 is expected to operate at the highest levels of resilience and security, including interoperability with other networks and technologies, according to Nokia. The upgrade will enable faster and more secure data transfers for ENAV's air traffic controllers and other aviation stakeholders such as airlines, airports and business aviation operators.

Transitioning to an IP-based air traffic network environment will also place Italy a step ahead of other ANSPs throughout Europe for the eventual region-wide deployment of the Internet Protocol Suite (IPS) concept of operations. The Airlines Electronic Engineering Committee (AEEC) recently made major strides toward the delivery of IPS, by approving new data link standards changes to ease avionics interfaces with newer L-Band satellite and other Internet Protocol (IP) equipment for improved air-to-ground communications.

"This new Ground-Ground network will allow ENAV to comply with the highest standard of safety while keeping operational expenses under control, using a converged platform to manage legacy systems and applications they still need to keep along with the newest Internet Protocol based air traffic control systems. The new infrastructure will also be able to leverage new capabilities that ensure more efficiency on multicast communications as well as differentiated Quality of Service and restoration mechanisms. Once this high capacity network is in place, ENAV may plan newer and more flexible services," Harris said.

Neither Nokia or Sirti have confirmed a timeline yet on when the upgrade will be complete.