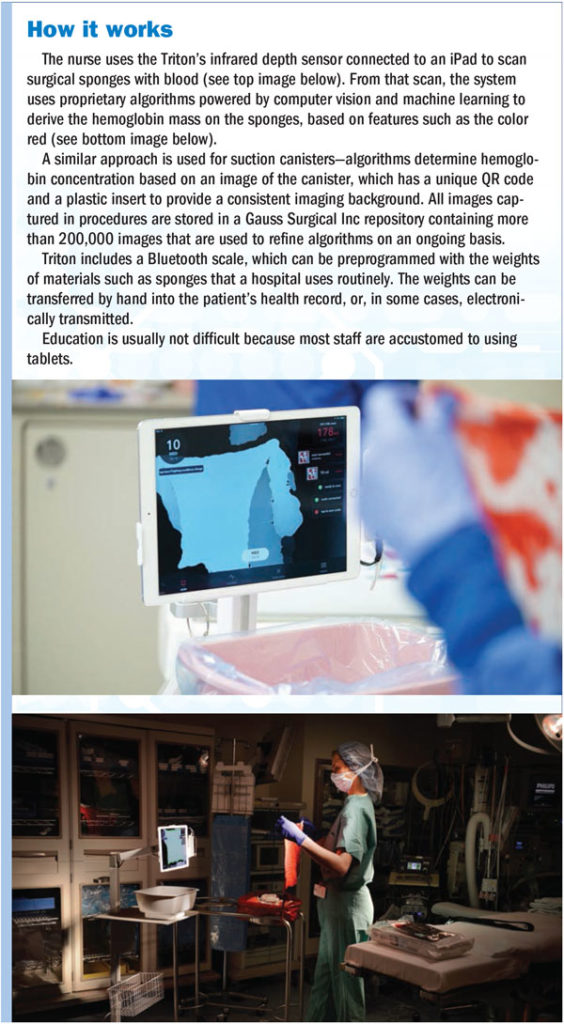 Blood loss during labor and delivery (L&D) and surgical procedures can lead to serious complications that might be prevented with early detection; however, detection can be challenging. For example, clinicians have traditionally estimated blood loss visually–a subjective and often inaccurate process. Humans' eyes simply aren't good at making precise measurements, such as the amount of blood on a surgical sponge.

Another problem can be identifying what is, and isn't, blood. Labels on suction canisters are used to measure volume, but blood can be mixed in with other fluids such as irrigation or amniotic fluid, making it hard to obtain accurate numbers.

One solution to the challenge of early detection of blood loss is the Triton system, a mobile application that calculates the hemoglobin content of surgical sponges and the liquid in suction canisters by using artificial intelligence to analyze scans taken by an iPad (sidebar at right). The system, manufactured by Gauss Surgical Inc, Los Altos, California, quantifies blood loss into a specific number. It received initial clearance from the Food and Drug Administration in 2014.

So far, so good

"This product gives us the ability to take it down to the cellular level of what's blood instead of rinsed fluid or amniotic fluid," says Lorraine Parker, MSN, RN, CNML, CENP, patient care administrator at Winnie Palmer Hospital for Women & Babies in Orlando, Florida, which performs about 600 cesarean deliveries a month and sees about 14,000 babies delivered each year. The hospital has been using Triton in all deliveries for about 4 months.

Having objective measures of blood loss also reduces unnecessary transfusions. For example, a 2018 study by Rubenstein and colleagues showed that, compared to visual estimates, Triton improves recognition of postpartum hemorrhage after cesarean delivery, while reducing the amount of blood transfused and shortening length of stay. And a 2017 study by Bernal and colleagues reported that use of the Triton system reduced transfusions in burn patients undergoing wound excisions.

"Giving the right amount of blood decreases the costs of blood products," Parker says. Quantifying blood loss also helps avoid unnecessary ICU stays caused by uncertainty about how much blood was lost, as well as litigation costs that may be incurred if a mother dies. "You can intervene quickly, avoid blood products, and stay out of the ICU," Parker notes.

Currently about 50 hospital systems in the United States are using Triton, primarily for vaginal and cesarean deliveries. The system also is being applied in burn surgery and pediatric spine surgery, with the goal of expanding into general surgery.

National associations such as the Association of Women's Health, Obstetric and Neonatal Nurses are pushing to quantify blood loss after delivery. Lalumiere says Triton fit into UNC REX's efforts to address the issue, which were being spearheaded by an interprofessional team.

Hospitals can choose to lease the Triton system at $2,000 per month per OR, about $30 to $80 per procedure, depending on the volume, according to Gauss Surgical. In making the business case, Lalumiere says, "We could speak to the fact it would give us better results for our patients and save nursing time because it eliminates the long process of tallying, measuring, and calculating blood loss." Parker notes that not every room may need the system because it's mobile. In addition, the hospital's biomedical department keeps a spare system.

Parker and Lalumiere agree that, like any change, overcoming resistance is key for success.

Lalumiere reduced resistance by explaining how the Perinatal Quality Collaborative of North Carolina was moving toward quantifying blood loss. She also shared an exercise from one of the collaborative's educational programs in which attendees guessed blood loss by looking at sponges, drapes, and pads with fake blood. "It was amazing how different the numbers were from person to person," Lalumiere says.

"Initially, it feels like [the system has] added time to the procedure, but after the learning curve, it's time neutral and doesn't add to OR time," Parker says. "When staff get into their first significant case of bleeding, and they see they have real-time data, they feel good about it, and that helps with buy-in."

Buy-in from surgeons and anesthesia providers also is important. "Spend time on the front end with physicians, identifying champions and having grand rounds," Parker says.

Right thing to do

Parker suggests OR leaders who are considering Triton reach out to hospitals with a case volume similar to their own. "Talk through some of the challenges they had because challenges will vary depending on the size of the hospital. Be sure to have as many people as possible involved when the product is being demonstrated," she says.

"Quantifying blood loss is the right thing to do, so we are going to do that for the safety of our patients," Lalumiere adds. ✥