What the First Passenger Air Taxi Services Will Look Like 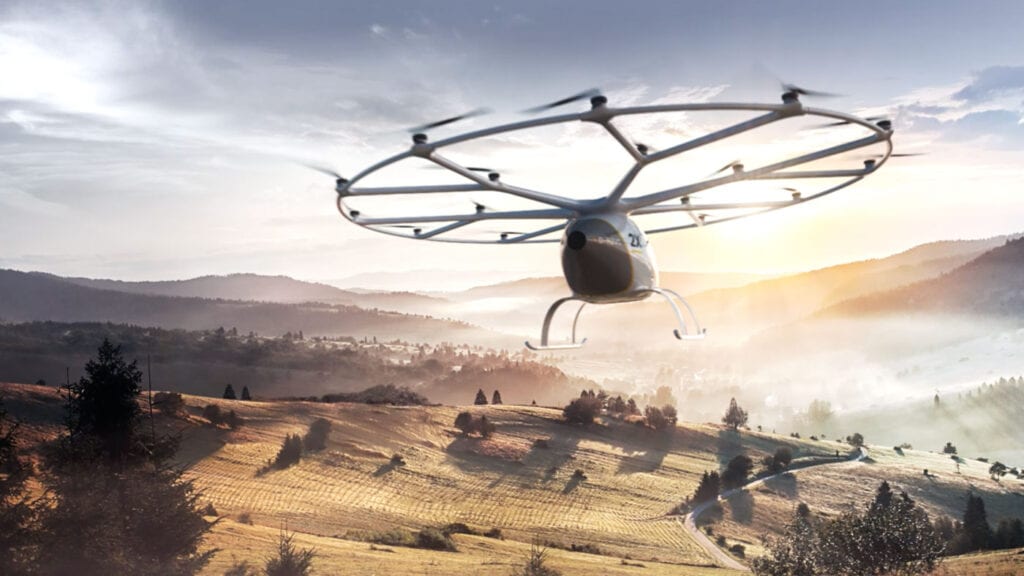 In their early days, eVTOLs might mostly leverage existing infrastructure and demand to offer a change of pace – and altitude – from trains, buses and cars, rather than create new routes and markets. (Volocopter)

The early days of passenger air taxi service are likely to be more conventional than one would expect from what has been hyped as a transportation revolution.

The aircraft will, of course, represent a huge leap forward in aerospace technology. Electric vertical takeoff and landing (eVTOL) vehicles promise to be cleaner, quieter, cheaper and safer than helicopters, paving the way for vertical flight to expand its footprint around the world.

But the first applications of eVTOLs will be less exciting than the on-demand, autonomous urban taxi services promoted by Uber Elevate and cited as a ‘North Star' by Wisk, a joint venture between Kitty Hawk and Boeing. The futuristic concept of accessible, affordable three-dimensional travel in urban and suburban spaces will require significant advancements in airspace management, autonomy and regulation – all undergirded by mounds of flight data – that won't be ready by the time the first eVTOLs are certified for commercial operations.

Lilium, with its 186-mile range, four-passenger eponymous jet, plans to start with scheduled routes between 20 to 180 miles that have high existing two-sided demand in order to maintain a load factor that makes sense economically – roughly 72 to 76 percent, according to Oliver Walker-Jones, the company's vice president of communications. If the third passenger seat is filled, the company takes home up to a 30 percent profit margin.

Take, for instance, New York City to Philadelphia – a highly-trafficked part of Amtrak's Northeast Corridor rail system. At a distance of about 81 miles, this trip can take two hours or more by car and about 80 minutes via train. Lilium would offer a 24-minute trip for $170, according to Walker-Jones, which is about the price of a first-class ticket on Amtrak's speedy Acela trains.

In that scenario, Lilium's air taxi service may be competitive with higher-end rail service, but the company is also in talks with numerous cities and rail service providers to co-locate vertiports with existing transportation in a complementary fashion. 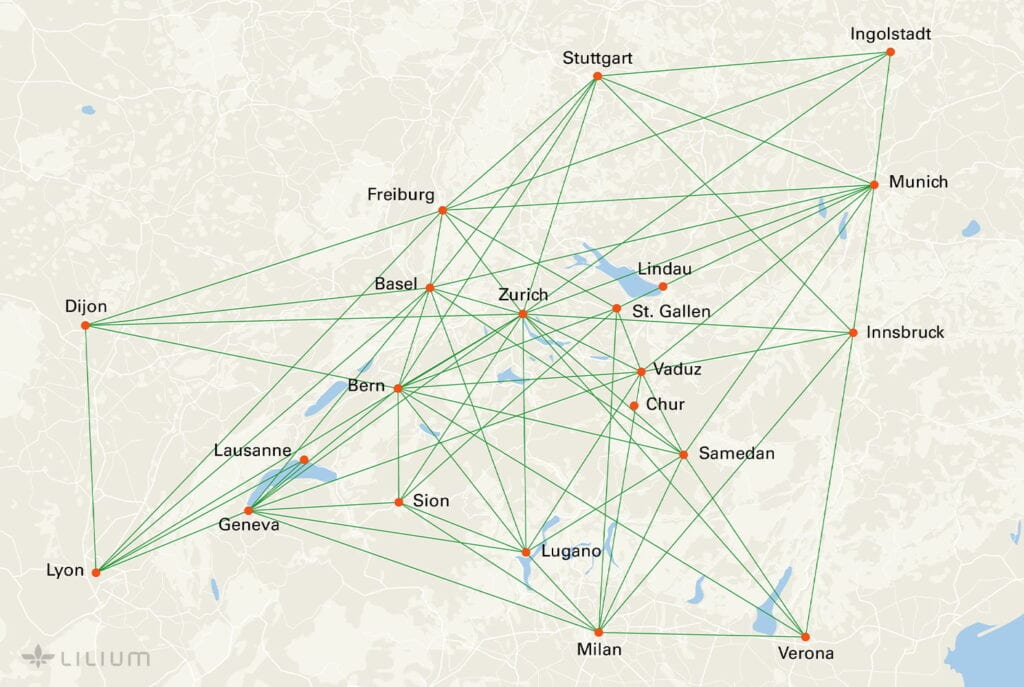 Pictured is how Lilium envisions a service network centered around Zurich, Switzerland. (Lilium)

Deutsche Bahn, one such operator in Germany, has invested in both Volocopter and infrastructure provider Skyports, expressing interest in building more air mobility into their existing network – also a much cheaper way for air taxi operators to test routes and service options in the early days.

"We are looking into different modes of transportation and how we can integrate that into the existing network, and it is likely that will include air taxis in the not too distant future," Boris Kuehn, managing director of Deutsche Bahn Digital Ventures, told Skyports recently. "Deutsche Bahn own the most mobility hubs in Germany and our train stations already connect different modes of public and private transportation. In big cities they are located right at the centre and serve as a transfer point. We are currently in the process of assessing the feasibility of integrating vertiports in our train stations."

Volocopter, with its two-seat VoloCity multicopter that has a shorter range of 20 miles and a cruise speed of 68 mph, is also in talks with rail operators and cities to offer their service a convenient option amongst many existing other transportation choices.

A representative for the company explained that they see the future of mobility as increasingly multi-modal and flexible, with technology offering people a number of options based to reach their destination based on intended time, price, and number of passengers. Airport shuttle services and moving from city hubs to other common destinations are attractive early applications for the VoloCity.

Uber also sees airport shuttle services as a central part of its air taxi business, which the company hopes to launch in three cities in 2023: Dallas-Fort Worth, Texas; Los Angeles, California; and Melbourne, Australia.

"We expect trips to and from airports will comprise a major part of the Elevate business given that major airports tend to be further from city centers, making for long trips by ground," a representative for Uber told Avionics. "We've been working closely with LAX and DFW in our launch cities, as well as surrounding regional airports where we have an opportunity to leverage existing infrastructure from the outset."

Paul Puopolo, executive vice president for innovation at DFW Airport, confirmed the facility has been discussing UAM operations with Uber, including flight tests in the metroplex area with a broader local coalition, and views the sector as important to improving travelers' complete journey. Many aspects of how and where to integrate UAM into the airport are currently being assessed by DFW's planning team.

"As we look at airport locations [for on-campus UAM service], we need to ensure we have other processes in place to facilitate the time savings UAM is expected to deliver," Puopolo told Avionics via email. "For example, it wouldn't make sense to take a UAM to the airport but have a significant connection time from the landing site to the terminal. One of the critical decision points is knowing how many vehicles will need to be supported and the volume of expected flights per day. This will determine operationally, the best location for servicing the vehicles as well as transitioning passengers. We know this a new space, so we may pick a short-term location while assessing another option as the market develops."

The volume of UAM vehicles is a key undetermined piece of information, from DFW's perspective, affecting these decisions. Representatives for LAX declined to comment at this time.

"Right now we are in Phase I of the program, which is preparing for a limited number of vehicles for a specific flight condition, so the investment should be manageable," Puopolo said. "There are a lot of unknowns with this technology but we plan to take it one phase at a time to learn and improve before moving on to the next phase."

Uber's data projects that most air taxi trips will range from 20-60 miles, with an average trip length of 25 miles, according to the company. And though shorter trips tend to be efficient by ground and difficult for an air taxi to save passengers time, Uber expects it will be more difficult to achieve high load factors for longer trips.

In the United States – and likely many other nations – early air taxi operations will likely operate within existing airspace systems and regulatory requirements, as laid out by the Federal Aviation Administration's draft urban air mobility Concept of Operations, released earlier this summer, likely restricting flights to less direct routes.

Technologies including ground-based or onboard detect-and-avoid, vehicle-to-vehicle communications, and improved sensors and computer vision will slowly enable UAM operators to reduce separation minima and perhaps allow flight over more densely-populated areas that will in turn improve the value proposition.

Fully autonomous commercial aircraft are likely to appear first in cargo and logistics applications, where the stakes are lower than with human passengers onboard.

Eventually, the passenger applications of air taxis may become what many eVTOL advocates and investors dream of: mobility options that create entirely new methods of movement and allow for previously impossible patterns of life and living. Bypassing much of the cost involved in new infrastructure required for most terrestrial mobility, passenger air taxis promise an inherent flexibility that allows for creative thinking and applications.

But in their early days, eVTOLs will simply leverage existing infrastructure and demand to offer a change of pace – and altitude – from trains, buses and cars.