Emerson Offers New $29B Bid to Take Over Rockwell Automation

Emerson Chairman and CEO David Farr on November 16 sent Rockwell's president and CEO, Blake Moret, a letter urging the company to consider the bid. "The industrial logic for this combination is clear. A combination of Emerson and Rockwell would create a leader in the $200 billion global automation market," he wrote.

"Together, we could offer an unmatched technology portfolio that addresses customers' current and future needs for a fully connected enterprise, where process, discrete, and hybrid work seamlessly together rather than relying on single, disparate platforms," he added.

In August, Rockwell rejected a previously unsolicited acquisition bid from rival technology enterprise Emerson that valued the company at $200 per share. In late October, Rockwell thwarted another offer, this time for $27 billion to take over all outstanding shares (a value of $215 per share).

Emerson's offer on November 16 sweetens the deal even more. Emerson is offering a total enterprise value of $29 billion, proposing to acquire shares of Rockwell for $225 per share ($135 per share in cash and $90 per share in Emerson shares).

On November 16, Emerson's Farr said the renewed offer "represents an attractive 30% premium to Rockwell's undisturbed 90-day volume weighted average share price as of October 30, 2017, the day before our prior acquisition proposals became public."

If Rockwell accepted the bid, it would mean Rockwell shareholders would own about 22% of the combined company, "allowing them to participate in the significant value creation from synergies generated by a combination," Farr noted.

POWER contacted Rockwell for comment about the renewed bid but did not receive an immediate response.

For Rockwell–which is holding a highly attended Automation Perspectives event in Houston this week to showcase myriad new technologies and services it has introduced or will soon launch–the offer might not be lucrative enough. Rockwell executives told reporters and customers at an introductory event on November 15 that opportunities in automation across all sectors are expanding rapidly, and that the company is aggressively carving out investments to dominate that growing digital space.

The Prospect of Long-Term Value Creation

In slides (Figure 1) connected to Emerson's November 16 proposal obtained by POWER, Emerson suggests that a merger of the world's two biggest automation companies could create a leading company focused both on process and hybrid automation, and discrete automation. It would also create a leader in "attacking the IT/OT convergence across all automation applications with enhanced investment, scale and strategic relevance given ability to combine automation and enterprise software layers more effectively," Emerson said. 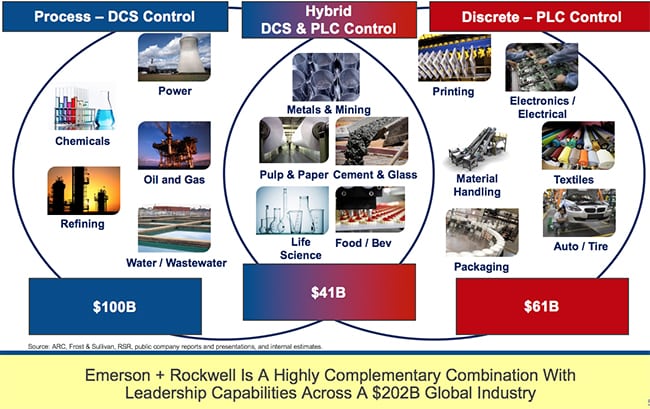 The slides further suggest that a consolidation of the two automation giants would secure its footing in the global automation industry, giving it an advantage and making it highly competitive with rivals Siemens, Schneider Electric, ABB, Honeywell, Yokogawa, and Mitsubishi. Synergies would allow it to win larger projects, including for main automation contractor or main electrical contractor. It would also allow the two companies to offer more in-house products as well as optimize materials and manufacturing costs

Emerson on November 7 reported net sales of $15.3 billion for the fiscal year that ended on September 30, 2017–an increase of 5% compared to the year before. The results are positive for the company which had entered a strategic portfolio repositioning two years ago, during which it wholly aligned around two business platforms: Automation Solutions and Commercial & Residential Solutions. The automation solutions division contains operations and the company's leading brands, such as Process Management, ASCO, Branson and Appleton units.

In a press release, Emerson Chairman and CEO David Farr said the realignment gave the company's "teams clear direction and an unwavering focus on serving our customers and profitably building these world class businesses through organic and inorganic opportunities."

Underlying sales of automation solutions, in particular, soared 18% in an upward trend during the fourth quarter, driven by "improving conditions in energy related, hybrid and general industrial markets," Emerson said. "The opportunity funnel of large projects has continued to grow, and the Company expects to have increasingly better visibility on project timing as our customers' capital budgets firm up in the first calendar quarter of 2018."

Market conditions began trending favorably for Emerson in the second half of 2017, the company said, and the company's 2018 outlook looks positive.  The company forecasts oil and gas prices will remain stable "in a range favorable for energy related markets" next year.

Rockwell CEO Blake Moret said the company saw positive contributions from all its regions, noting that oil and gas returned to "meaningful growth" in the fourth quarter, helping its process business to grow above the company average.