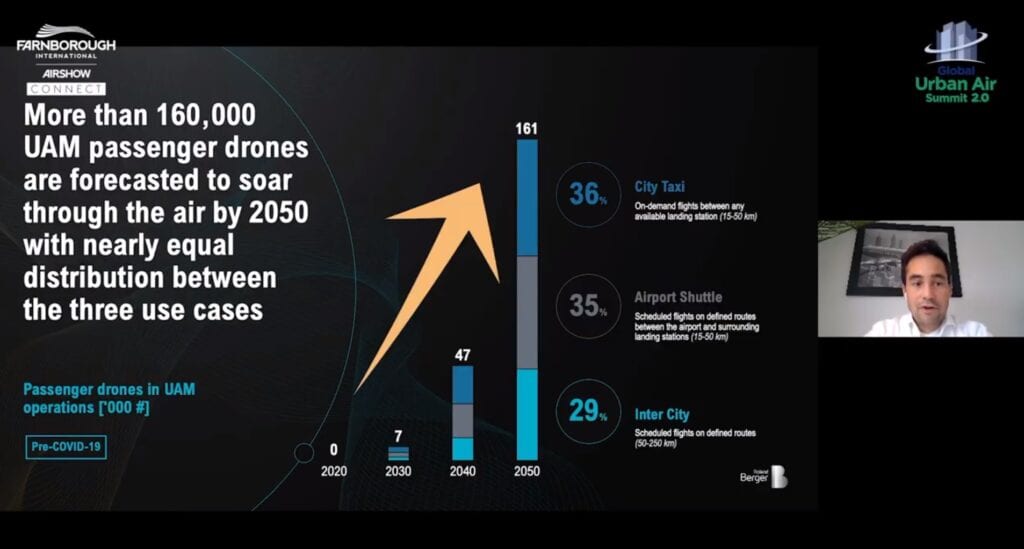 Roland Berger estimates 160,000 air taxis will be operational by 2050, but the vast majority of the revenue to be made will be from longer, scheduled flights, rather than intra-city taxi service. (Roland Berger)

For all the hype surrounding high-speed urban air taxis, Munich, Germany-based consultancy Roland Berger believes that shorter distance, on-demand urban use case accounts for just 10 percent of the potential market for these vehicles.

Roland Berger is the opposite of bearish on electric vertical takeoff and landing aircraft (eVTOLs). The firm estimates 160,000 vehicles will be in use by 2050, creating a transportation market worth $80 billion annually. Those vehicles will be almost evenly split between short-range, on-demand city taxi service, scheduled airport shuttle service and longer-range, inter-city transportation.

But only 10 percent of that revenue will come from on-demand city taxi service, mostly due to higher prices and greater numbers of passengers, according to Manfred Hader, co-head of Roland Berger's aerospace and defense practice. Airport shuttle services will make up 50 percent of that market, with the remaining 40 percent captured by regional or inter-city transportation, which Roland Berger defined as scheduled flights between 30 and 155 miles.

The consultancy's analysis fits closely with the strategy pursued by German air taxi startup Lilium, which aims to bring its four-passenger electric air taxi into service by 2025. Lilium is eyeing distances between 12 and 180 miles, with routes in the middle of that range showing the most opportunity to fill transportation gaps and save customers a significant amount of time.

"With a range of up to 300km (186 miles), we'll be able to focus on connecting entire regions with high-speed transport, rather than trying to persuade you that we're quicker than a crosstown journey on an underground train or bike," the company wrote in a recent blog post. "In fact, contrary to the idea of ‘urban air taxis' we think there will only ever be a handful of routes in our network that are shorter than 20km (12 miles)." 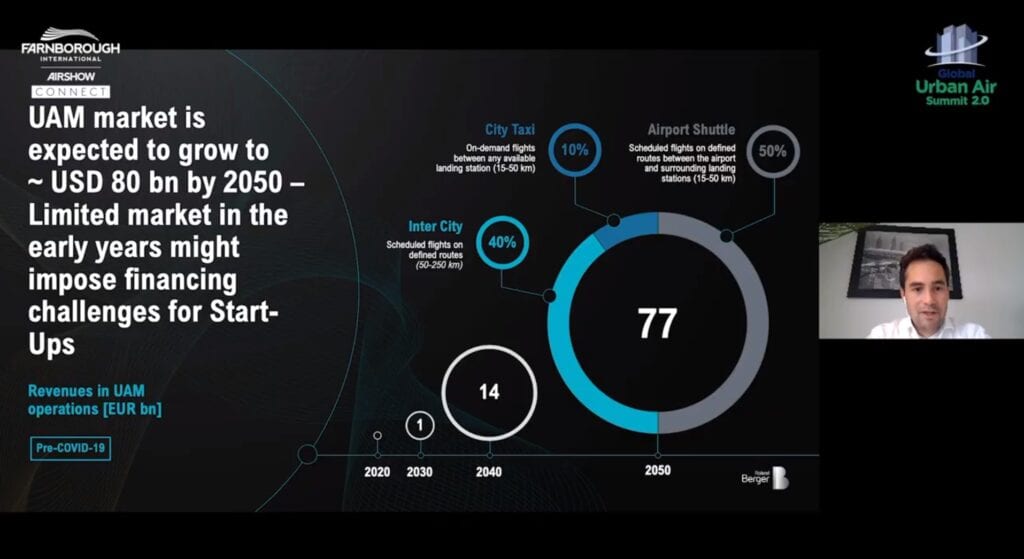 Uber's focus, however, continues to be on the short-range city mission, optimizing multi-modal transportation with its car service and greater integration with existing public transportation.

"You don't need very long ranges, in fact they won't be used that much," Eric Allison, head of Uber Elevate, said during a recent discussion hosted by the Farnborough Airshow. "Effectively what you need to be able to do is operate continuously around short missions for some period of high-demand window … and the batteries that exist today can do that, and they can do that in a way that makes sense economically."

Uber's target market may also include much of what Roland Berger defines as airport shuttle service, since the consultancy defines both city taxi and airport shuttle mission as between 9 to 30 miles.

Bell, one of Uber's vehicle partners, notably pivoted from an initial hybrid-electric design with up to 150 miles of estimated range to an all-electric design with just 60 miles of range. The company explained the move in part by citing a re-evaluation of use cases presented by potential customers, though the downsides of a hybrid propulsion system may have played a part in that analysis as well.

"We came into this thinking it'd be close between hybrid and electric, for the mission of urban/semi-urban on-demand where we see the bulk of the demand, and that potentially hybrid would prove to be the better near-term approach," Allison said, explaining Uber's decision to make its ecosystem all-electric.

"As we've done more analysis on this, we've come to the conclusion that all-electric … has a number of benefits outside of just the aircraft. "You don't have to have liquid fuel on top of potential sites for infrastructure, you don't have to have any concerns about getting fuel to a refueling point, in terms of many of the places that would have high utilization."

All of the market opportunities for eVTOLs will develop slowly, according to Roland Berger's analysis, with just 7,000 passenger eVTOLs creating a $1 billion market in 2030.

"As we go down the learning curve and the scale of services increases, we will see the transition to a premium public transportation means where UAM services will be comparable to taxi services in terms of cost and price," Hader said, noting that the speed at which the industry is able to move down that learning and price curve – thereby providing services to a larger portion of society – will be critical to public acceptance.

Michael Dyment, managing partner at Nexa Advisors and a prominent investor in aviation infrastructure, is taking a city-by-city approach to evaluating early use cases, but agreed that airport shuttle services are likely to be a major use case for eVTOLs.

"Some cities don't have a need for on-demand air taxi the way it's visualized by, say, Uber Elevate. Others do," Dyment told Avionics. "As an early use case example, for the Greater London area in the UK it is regional/suburban travel (Oxford-Cambridge, Stevenage-Gatwick)."

Gary Cutts, director of UK Research and Innovation's Future Flight Challenge, said the government-funded effort to bring about widespread use of new aircraft is as much focused on developing use cases with either strong market interest or social value as it is the vehicles and enabling technologies.

"I don't find it clear yet [what those use cases are]," Cutts said. "Is the most important use in rural areas, where there are some very interesting places that are very hard to reach, and there's a huge appetite to connect them? Is it your classic within-the-city electric air taxi?"

"But when you look at the very short-range variance of that, the alternative is still pretty compelling," Cutts added. "It's kind of hard to make the case … the economics are possibly not so compelling. I think that the one that may take off is the use case that's somewhere in between urban air mobility and a small sub-regional market, connecting people into cities."