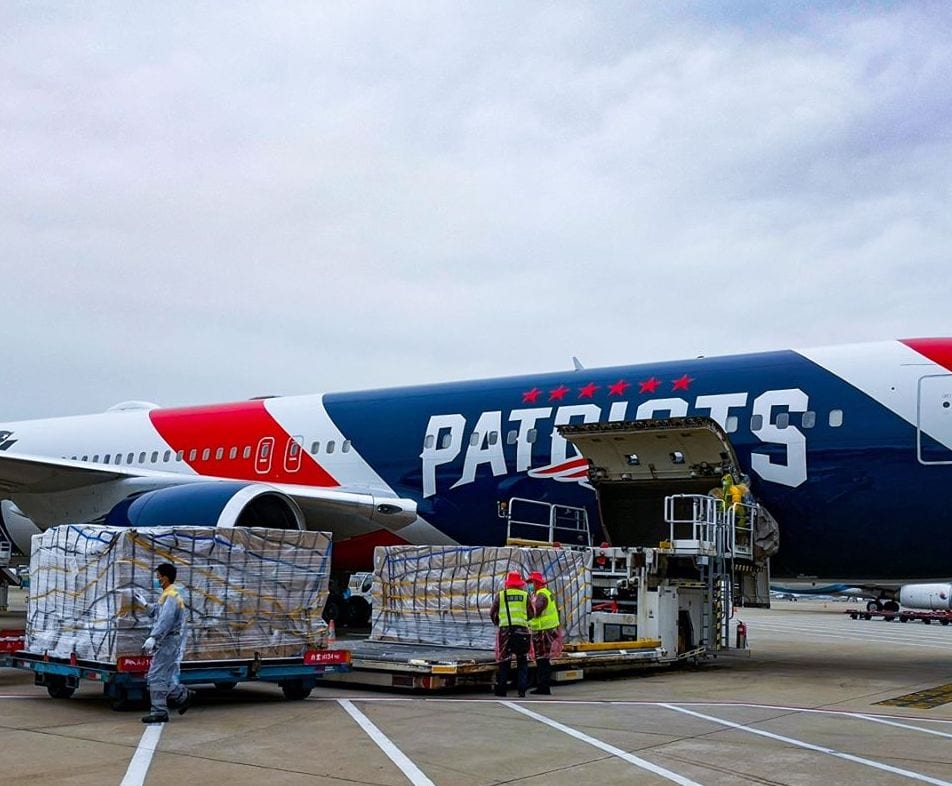 A Boeing 767-300ER used to transport the New England Patriots delivered more than one million N95 masks from China to the U.S. on Apr. 2. The plane's avionics for the trip were enabled at the AMES MRO in Wilmington, Ohio. This is an image posted to the Patriots' Facebook page showing the aircraft being loaded with N95 masks in Shenzhen, China. Photo: New England Patriots

While cargo carriers, like UPS and FedEx and Atlas Air, have played a significant role in delivering COVID-19 medical relief supplies to the United States from China and other nations, private carriers have also played a part.

One of those efforts resulted in the delivery of more than one million N95 masks to the U.S. from China after the plane touched down at Boston's Logan Airport on Apr. 2.

In the middle of last month, the Kraft Group, led by Chairman Robert Kraft, the owner of the National Football League champion New England Patriots, entrusted Kraft Sports and Entertainment Chief Operating Officer Jim Nolan with the task of organizing a COVID-19 relief flight to Shenzhen, China to pick up more than one million N95 masks to aid health care workers in the northeastern United States, including Massachusetts, Rhode Island and hard-hit New York City.

Yet, the plane to be used for the journey, a Boeing 767-300ER, while fitted for international flights, was accustomed to journeys in North America to transport the Patriots team, not to international ones to China.

So before the plane could make its sojourn to Anchorage and then Shenzhen, it made a stop at the Wilmington Air Park in Wilmington, Ohio at Aircraft Maintenance & Engineering Services (AMES), a Maintenance and Repair Organization (MRO) and a subsidiary of Air Transport Services Group (ATSG) that bills itself as the world's largest owner and operator of converted Boeing 767 freighter aircraft.

"In these uncertain times, our maintenance technicians and engineers have been focused on providing critical services to our customers, making it possible for them to pick up and deliver critical supplies to areas that have been hit hard by the coronavirus pandemic," AMES president Todd France wrote Avionics International in an email. "The sacrifice and dedication of these technicians to providing world-class service when it is needed the most is a reflection of their character and of the local community where many of them live."

An Apr. 3 article on Patriots.com quoted Nolan as saying that the 767-300ER used by the Patriots was certified to fly internationally but needed an avionics upgrade for software "to provide a map of the flight path and the ability to communicate with air traffic controllers in that part of the world."

AMES said that it could not specify its tasks to prepare the aircraft, but Lincoln Francis, the CEO of Naperville, Ill.-based Executive Flight Management, Inc. and Team 125, which bought the 767-300ER in 2016 and refurbished it, said that the work in Wilmington did not involve avionics upgrades but enabling the avionics already on the plane.

Francis was also one of five pilots on the 12-man flight crew that helped fly the plane to and from Shenzhen.

For transoceanic travel, the plane has dual Collins Aerospace HMS-700 high frequency radios and a satellite AFIS system through Honeywell's Pegasus 2009 Flight Management Computer (FMC), which has 7.5 MB of capacity.

"There was not any upgrade required," Francis said. "We had turned on a subscription to Honeywell for satellite AFIS/ACARS and a few other items while we were in Wilmington. It was just a matter of getting a few things turned on."

Team 125, a CFR Part 125 air carrier, provides sports team travel and has spent tens of millions of dollars on buying and restoring two 767-300ERs used by the Patriots. Before their conversion, the aircraft had been at an end-of-service boneyard for commercial planes at San Bernardino Airport. American Airlines received the planes in 1991 and retired them in 2016. The aircraft for the Patriots' use entered service in 2017 and include new Innovative Solutions & Support (IS&S) cockpit flight displays.

Beside AMES and Team 125, Honeywell was also heavily involved in preparing the Team 125 767-300ER for its flight to Shenzhen.

"The [avionics] work performed mainly focused on enabling communications capabilities the aircraft already had for air traffic control and AOC communications, as well as enabling the cabin connectivity system provided via Honeywell's JetWave Ka SATCOM and Forge cabin connectivity services, which provided the crew with high-speed internet connectivity for the trip along the entire route," Jason Wissink, the senior sales director of Connected Aircraft for Honeywell Aerospace, wrote in an email to Avionics. 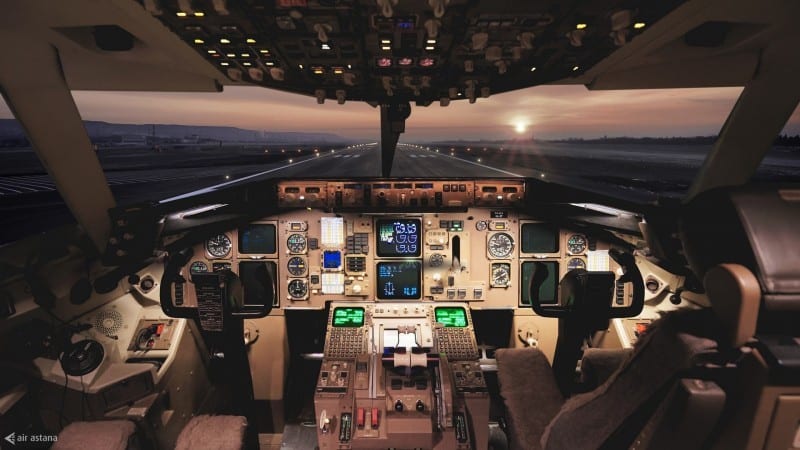 The cockpit of an Air Astana Boeing 767-300ER shows a look at the instrumentation used for the flight to transport the masks from China to the U.S. Photo: Qpano

"For a trip of this [transoceanic] nature multiple forms of long range communications equipment is necessary," he wrote. "While dual HF radios meet the requirement, HF performance can vary along routes such as these and often a satellite system will provide much clearer voice communications with ATC or the operations center as well as reliable data communications via ACARs."

To update the 767-300ER's 28-day Navigation Database (NDB) storing runways over 5,000 feet, Honeywell provided a "customized navigation database with global coverage that was filtered down to only include the runways and procedures needed for this trip, allowing all data to fit into one database," Wissink wrote in his email.

"Part of what really made all this come together was the technical engineering teams at Team 125, AMES, and Honeywell coming together and all working pretty long hours to reconfigure the aircraft in just a few days to have it ready for the trip [to Shenzhen]," Wissink wrote. "I know the teams on all sides worked very hard to get everything updated and configured in a fraction of the time it would normally take."

The trip to and from Shenzhen was first reported by the Wall Street Journal and Politico on Apr. 2.

Massachusetts Gov. Charlie Baker had his state order the masks, but commercial and cargo flights to transport them from China were few and far between so he looked to his friend, Jonathan Kraft, the president of the Kraft Group and the son of Robert Kraft.

That's where Jonathan Kraft said that one of the Boeing 767-300ERs used by the Patriots could help out.

By all accounts, Nolan worked tirelessly over several weeks to put the operation in play with the crucial aid of Huang Ping, China's consul general in New York City, who helped get the required flight and flight crew visa documentation approved by the Chinese government.

"An operator has to get permission to fly into and across any countries' air spaces," Arnold Oldach, an aviation industry expert, wrote in an email to Avionics. "With the airlines they are granted routes and there are reciprocal arrangements between countries so that their carriers can operate in and out of their respective countries. In this case, they don't operate as a Part 121 regularly scheduled carrier, but as a Part 125 carrier. They would then need special permission to fly into China." But Francis said that Team 125 is authorized to fly globally.

"In the timeline of preparation, it was only a question of obtaining permission from China to enter and depart during this pandemic," he wrote in an email to Avionics. To ease health concerns, the 767-300ER remained on the ground for only three hours in Shenzhen during the loading of the masks, and the crew remained on the plane during that time.